Highlights of the month

The blue whale has a long tapering body that appears stretched in comparison with the stockier build of other whales. It’s skin is a light blue to grey and has a mottled appearance which is distinctive for this species. The head is flat, U-shaped and has a prominent ridge running from the blowhole to the top of the upper lip. The front part of the mouth is thick with baleen plates; around 300 plates (each around one meter (3.2 ft) long) hang from the upper jaw. The dorsal fin is small, visible only briefly during the dive sequence.
Habitats: The Blue Whale is found mostly in cold and temperate waters and prefers deeper ocean waters to coastal waters and areas close to an oceanic trench. There is also a population of Blues found in the Indian Ocean which can be seen off Sri Lanka. Sri Lanka has both a resident population of Blues residing year-round and a migratory population which moves from Arabian sea to the Bay of Bengal between December – April.

Behaviour: Blue Whales live individually or in very small pods (groups). They are usually seen solitary or in pairs (mother-calf pairs or two adults), although they may gather in loose groups to feed. Occasionally larger numbers maybe encountered, especially off Mirissa and Trincomalee.

Where can I look for Blue Whale while on tour?
Between November – April, Blue Whales can be encountered off Mirissa just a few nautical miles from the shore and the strike rate for sightings is over 95% during the season. From Trincomalee, Blue Whales can be seen from February through to August and the strike rates appear to be around 80%. Whale watching excursions are usually 4 – 5 hours in duration only and the whales are often just 5 – 7 nautical miles from the shore.
Did you know? A blue whale heart is the size of a Mini Cooper and can weigh close to 2,000 pounds. 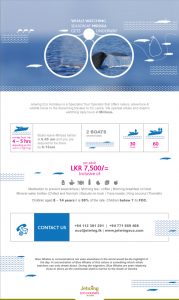