Saturday, 4th September 2010
Today marked the start of probably my best weekend in Sri Lanka yet.  Despite the 2am start, this weekend couldn’t have been better to round up my time in Sri Lanka.  At 3am, Riaz and Mudara (who I’d visited Wilpattu with) picked me up and we started our journey to Uda Walawe National Park.  When we had almost reached Uda Walawe we encountered the most beautiful sunrise.  We had to get our cameras out quick because the sunrises here are over in about 1 minute.  At 6am we entered the park.  Uda Walawe promises elephant sightings but nothing would prepare me for the sighting we were to get.  A few elephants appeared here and there, some alone and some with young, and I was delighted to even see that.  But soon we stumbled upon a lone male who was clearly in musth and was in a slightly agitated and restless mood, but not quite aggressive.  He was rather curious and interested in us and began to walk closer, and closer…and closer to our car.  Soon, this enormous male elephant was standing directly at my window, looking in at me.  If I had stuck my arm out of the car I would have touched him.  Even writing about this experience gives me goosebumps – it was the most thrilling and exhilarating feeling.  He circled our car a couple of times, always stopping to look at us.  After about 20 minutes he walked away and all of us in the car could finally let go of our breaths and looked at each other, wide-eyed and awe-struck. You do not get better elephant sightings than that! 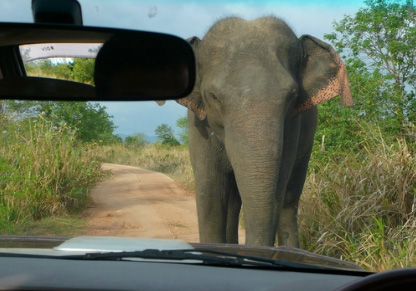 We continued along our way and were all full of adrenaline after what we had just experienced.  After that, we had a few excellent elephant encounters, but nothing matched up to the big, prying male.  The birdlife throughout the day was exceptional also.  We saw Pied and Common Kingfisher, Crested Serpent Eagle, Brahminy Kite, Indian Roller and Black-winged Stilts among others.  We stopped at several waterholes to observe the birds and I remember sitting there thinking that I could genuinely sit there and watch these birds all day.  On our way out of the park we saw 3 startled Jackals who quickly scurried away.

Next on the agenda – an afternoon safari in Yala!  After dropping off our bags at the Tamarind Shade Holiday Bungalow in which we were to stay, having a quick nap and the most incredible meal made by the staff, we were off.  We entered the park with our friendly and knowledgeable tracker, Brabath, and I was taken aback at how stunning Yala is.  Our luck at Uda Walawe was clearly continuing because within about half an hour of being in the park we saw a leopard.  It was only a brief glimpse but I was totally speechless.  I had never seen a leopard before and only when seen in the flesh do you realise how truly beautiful they are.  Even if I didn’t see a single living thing for the rest of the day, I was satisfied!  But we did.  We saw Crocodiles, a stunning array of birds, Spotted Deer, Sambar Deer, Wild Boar…and another leopard!  I only caught sight of it for about 2 seconds but was still thrilled.  Also seen that day was a striking Tusker.  I was convinced it knew it was being watched and photographed because it was definitely putting on a show.  It was then joined by another very young Tusker!  The Jeeps were piling up around us because this was such an infrequent sight.

By about 6:30pm we were all feeling very sleepy, seeing as we had been up since 2am, so decided to head back to the bungalow.  After a delicious buffet dinner at Yala Village we all completely crashed, ready for our 4am wake up the next day!
Sunday, 5th September 2010
Hearing Mudara’s phone alarm go off at 4:10am began the day.  After a quick breakfast of papaya and sweet teas and coffees, we were off for another morning safari in Yala.

At 5:30am we were back inside, desperate for more than just a glimpse of a leopard.  5 hours later, no leopard.  Although slightly disappointed we still saw some fabulous sights.  One of the best was towards the end of the day when we saw a group of about 6 or 7 Wild Boar piglets sprinting across the open plains.  Soon, about 5 adult Wild Boar appeared and there seemed to be some form of commotion.  When we saw one of the Wild Boars with a chunk of flesh in its mouth we realised there had been a recent kill.  What we proceeded to watch felt like something off a wildlife programme.  The Wild Boar was guarding a piece of flesh with its life and when approached by another, it would scurry away.  Each time it dropped the flesh on the floor it would pick it up and drop it in nearby water to clean it, all the time frantically protecting it.  Riaz took 150 photos of this display.  Other sights included a baby elephant and adult scratching themselves on neighbouring trees.  It was so lovely that I took a short video on my camera.

Although a little disheartened at the lack of leopards, we were all still content with the day’s sightings.  On the way back we took a few photos of the magnificent white salterns and almost got Mudara’s car stuck in the wet sand!  On arriving back at the bungalow the staff had made a hearty breakfast for us and after devouring it like the Wild Boar earlier in the day, we set off.  What a weekend!