As I stepped off the plane in Sri Lanka, I received two messages instantly as I turned on my phone.  The first, from Gehan, asked me to ‘get in touch with Riaz urgently.’  I worriedly read the next text which was from Riaz, but to my relief and delight it read: ‘I am going to Sinharaja tomorrow early morning to meet Bill Oddie, the UK’s most famous birdwatcher who is in Sri Lanka presently.  You can join the team too.  However leaving at 5am.  Excursion.  Call me ASAP if interested.’  I couldn’t quite believe that on my first full day in Sri Lanka I was heading to the rainforest for a day with Bill Oddie! 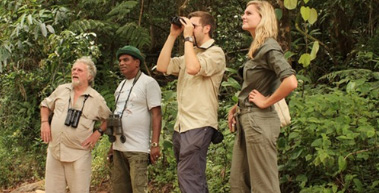 Riaz, Ganga and I began our trip to Sinharaja at 5:30am the following morning.  Although tremendously jetlagged, I couldn’t sleep at all on the way there as the sights during the drive were so incredibly beautiful, such as the school children in their pristine white uniforms and the tea plantations.  The last stretch of the drive had to be carried out in a Jeep, for the roads leading up to Sinharaja are on exceedingly bumpy terrain.  By about 9am we had arrived at the stunning tropical rainforest.

After fitting ourselves with the not so fashionable but vital ‘leech socks’ we were ready to set off into the rainforest on our quest to find Bill Oddie!  We knew he was accompanied by a journalist, Liam Creddon, and one of Jetwing’s tour guides, Sam.  Within minutes of walking we experienced a ‘Bird Wave.’  Riaz had explained to me on the journey there that this is a special moment when a group of entirely differing birds all appear to move at once, all in unison.  Seeing one within a few minutes of walking was remarkable and within it we saw about four of the endemic Red-faced Malkohas and the Ceylon Blue Magpie, both highlights of a day in this particular rainforest.

We continued to see some fantastic sights.  Among them were the giant squirrel, the wood spider and a pair of mating butterflies.  The female wood spider was almost the size of my hand and I was astonished to see that the male wood spider was about the size of a thumb nail!  We continued to have luck in our quest for birds, seeing the beautiful Ceylon Junglefowl which was surprisingly confident.  The Yellow-eared Bulbul was another of our sights, with its remarkable black and yellow facial patterns, along with the Crimson-backed Flameback.  We weren’t having the same luck in our quest for Bill.  There are multiple routes within the Sinharaja rainforest and we often came to crossroads and had to ask ourselves, “Which route is Bill most likely to take?”  Just as we were about to return back to base camp, we saw Bill, Liam and Sam walking in our direction!  Their moods were unfortunately dampened for they had not had much luck in spotting the birds they wished to see.  Bill also had clearly suffered a leech attack and was bleeding in various places, but took it all in good humour.

We all continued walking and were desperate for Bill, Liam and Sam to have the luck that we had had.  We had a brief sighting of the Crimson-backed Flameback again, but all decided that hunger had struck and headed back to base camp to have a delicious and spicy Sri Lankan curry for lunch.  After a chat and a photo session, we left Bill, Liam and Sam to continue on their pursuit for the exotic birds of the Sinharaja rainforest.  Let’s hope they had more luck in the afternoon!