The seas off the Kalpitiya Peninsula, situated on the West coast of the island, are rife with exceptional wildlife.

Whales are regularly seen around the Kalpitiya Peninsula.  Boat trips are regularly taken off the beach at Alankuda and head out to sea to see them.  Sperm whales, the largest toothed whale in the world, can be seen off-shore of the reef.  The deep seas off the Kalpitiya Peninsula where the continental shelf lies, provide an ideal habitat for these giant oceanic predators, which need to dive several hundred meters to hunt prey such as the Giant Squid. It is also possible to see the occasional Blue whale here.  It is only from around February 2010 that Kalpitiya has been finally considered as an excellent spot to catch sight of the majestic whale.  The season for seeing these fantastic creatures is between December and mid-April.

Dolphins are regularly reported from Alankudaoutside of the South-west Monsoon, even daily!  It is the best place in Sri Lanka to observe large pods of Spinner Dolphins, an oceanic species, and it is possible to see up to six hundred in a day just a few kilometres off the shore.

Puttalam Lagoon is home to the Indo-Pacific Humpback Dolphin, also known as the Pink Dolphin.  These Pink Dolphins frequent where the far-reachingPuttalam Lagoon enters the sea and are the only cetacean known to come into lagoons in Sri Lanka.  Fishermen claim it is easy to see them early in the morning when they head out to sea at dawn.

Sri Lanka’s potential for watching pelagics is not yet recognised in full and was only recently developed by the Jetwing Eco Holidays team. The seas off the Kalpitiya Peninsula, situated on the West coast of the island offer great opportunities to observe rarely seen pelagics due to its close proximity to the edge of the continental shelf and the rich web of marine life close to the shore. It also runs in parallel to the peninsula. In addition to watching sea birds, Kalpitiya is the best place in Sri Lanka to observe large pods of Spinner Dolphins, often numbering in the hundreds. A bonus is the presence of Sperm Whales and an occasional Blue Whale.

This is a seasonal tour run in April only, as pelagic seabird movements occur at the onset of the South-west Monsoon, which occurs anytime from the 14th April onwards and places such as the beach atAlankuda are superb sites to watch seabirds.   Trips in-shore of the reef are certainly achievable on calmer days and make for even richer encounters.  During stormy days however, the pelagics often drift from deeper waters towards the shore, and might even settle on the beach, allowing sea bird watching to be conducted from the beach.  The nearby fishing villages in the Kalpitiya Peninsula attract seabirds to offal and these birds are often found near the beach at Alankuda.  Those going out on trips are always well stocked with food, water, soft drinks and at least three full tanks of fuel for the outboard motor engines

Our team has pioneered marine wildlife tourism in the island. We have had good views of pelagics such as Lesser Noddy, Brown Noddy, Flesh-footed and Persian Shearwater, Wedge-tailed Shearwater, Pomarine Skua, Arctic Skua, Bridled Tern, Red-billed and White-tailed Tropicbird etc during our seabird watching sessions around the island.   Other near-shore seabirds which are sighted regularly include Caspian, Large-crested, Lesser-crested, Common, Little and Gull-billed Terns.

An exhausted and wind blown Sooty Tern has been spotted on the beach at Kandakuliya, a more northerly location on the peninsula and an excellent area for spotting seabirds and pelagics.

Excellent sightings of waders can be carried out at the Nachchikalli Saltern.  Waders are small brownish birds which are found on the muddy, water’s edge of estuaries, lagoons, salt pans and mud flats.  The mangroves near the Nachchikalli Salt Pan are ideal for finding these birds, on the road which travel north through the peninsula.  Waders such as the Common Redshank can be seen and it is wonderful to see the transition from a plain winter plumage to a bold and distinct summer plumage.  It is not uncommon to record 75 species of birds in a single day and species seen include Little Stint, Lesser Sand Plover, Turnstone, Terek, Common and Marsh Sandpiper, Golden Plover and Grey Plover. 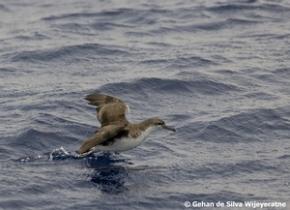