“My first introduction to Pinky I guess was not one 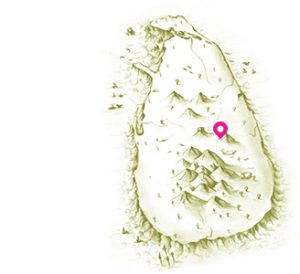 of the most affable encounters. She chased us down the road for nearly 500 meters before deciding to get some grass. This was way back in 1998 while visiting the Wasgamuwa National Park. And following that first encounter with Pinky we found out from park personnel that for reasons not known Pinky had a disposition to charge or chase vehicles and in the course of doing so had managed to mangle a few vehicles as well. So since that first exciting experience with Pinky, whenever we visited the park we would always keep a wary eye out for her. It was pretty nerve racking when we were travelling on jeep tracks that had thick jungle pressing right up to the sides of the road. In such habitat she could pop out from anywhere! But in open grassland type of terrain this was not a problem, since Pinky stood out like sore thumb among all the other females.

Pinky’s outstanding feature was these large patches of pigmentation she had on her ears, face and neck – hence the name. It was around then that we decided to start an elephant identifying project. Mature bulls of course had very distinct physical features but the females were a different issue. Female elephants too had physical features that could help to identify them, but most female elephants did not have very distinct features like Pinky. Nevertheless they all had features unique to each of them, but the challenge was to categorize what these traits were and how to record them for future analysis.”