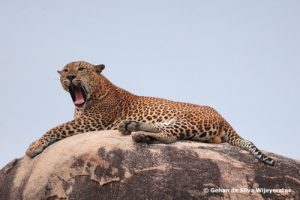 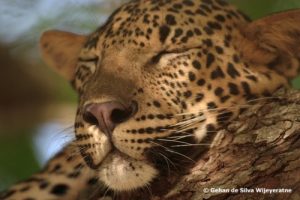 The leopard is the only species of big cat found in Sri Lanka. Leopards are highly adaptable feeding on a wide range of prey which can range from insects, fish, small mammals, deer, buffalo calves and in some areas where they survive in close proximity to villages and towns even domestic dogs and livestock are on the menu. Their range spans from the Southern tip of Africa through the Middle East and Asia all the way east to Indonesia and as far North as Russia surviving in a diverse range of habitats including scrub jungle, desert, rainforest, savannah and mountains.

The Leopard is solitary by nature and only comes into contact with other leopards during mating and territorial disputes. Male leopards are larger than females and can be easily identified by their size. A female gives birth to an average of 2-3 cubs. It is very rare that all would survive as infant mortality is high.

Panthera pardus kotiya  is one of the eight recognized subspecies  of Leopard in the world which is endemic only to Sri Lanka.  Leopards are found across the mountainous ranges, rainforests and the dry-zone jungles in Sri Lanka, with Yala and Wilpattu National Parks enabling good sightings of the big cats throughout the year. Due to the lack of other large carnivores such as lions, hyenas and tigers which are found across Africa and India for example, the Sri Lankan Leopard is the country’s top terrestrial carnivore making them much bolder and more active during daylight hours enabling good opportunities for sightings.

Leopard are Sri Lanka’s dominant predator, however wildboar and buffalo despite occasionally being on the menu pose a serious threat of death or injury to an over ambitious big cat. Mugger Crocodile can occasionally intimidate and steal leopard kills around the water’s edge while the omnivorous Sloth Bear too which despite feeding predominantly on fruit and berries will not pass up an opportunity of a free meal and have been known to chase off leopards away from a carcass.

Block I of Yala National Park in Southern Sri Lanka is one of the world’s top spots for watching Leopard.  Yala National park provides the ideal environment for the leopard with a mix of rocky outcrops and scrub jungle coupled with a high density of prey especially Spotted Deer which are numerous in the park enabling them to survive in much smaller territories compared to other parts of the world; Yala has an average density of one per every three square kilometers which is the highest in the world.  Protection against poachers and frequent visitation to the park over the past two to three decades has habituated most of Yala’s leopards to safari jeeps enabling good opportunities for close-up encounters.

Wilpattu National Park in North-west Sri Lanka is famous not only for being Sri Lanka’s oldest and largest National park but also for its leopards before the civil war erupted in Sri Lanka in the 1980’s making the park inaccessible. Since re-opening in February 2010, the frequency of sightings at Wilpattu are on the rise as more leopards are getting accustomed to the safari jeeps. Wilpattu national park consists of a mixture of forested areas and vast open villus or waterholes in the centre of the park and one of the most iconic sights is to get a leopard sighting on the white sand around the villus.

Leopard can be seen throughout the year at both Yala and Wilpattu National Parks, however the frequency of sightings appear to increase during the dry season from around May through to September. Kumana National Park (Yala East) is another potential and more secluded area where leopard maybe seen. 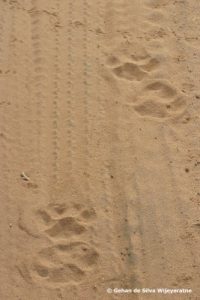 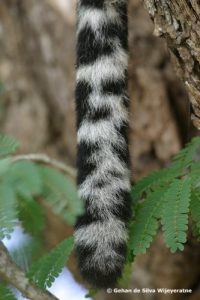